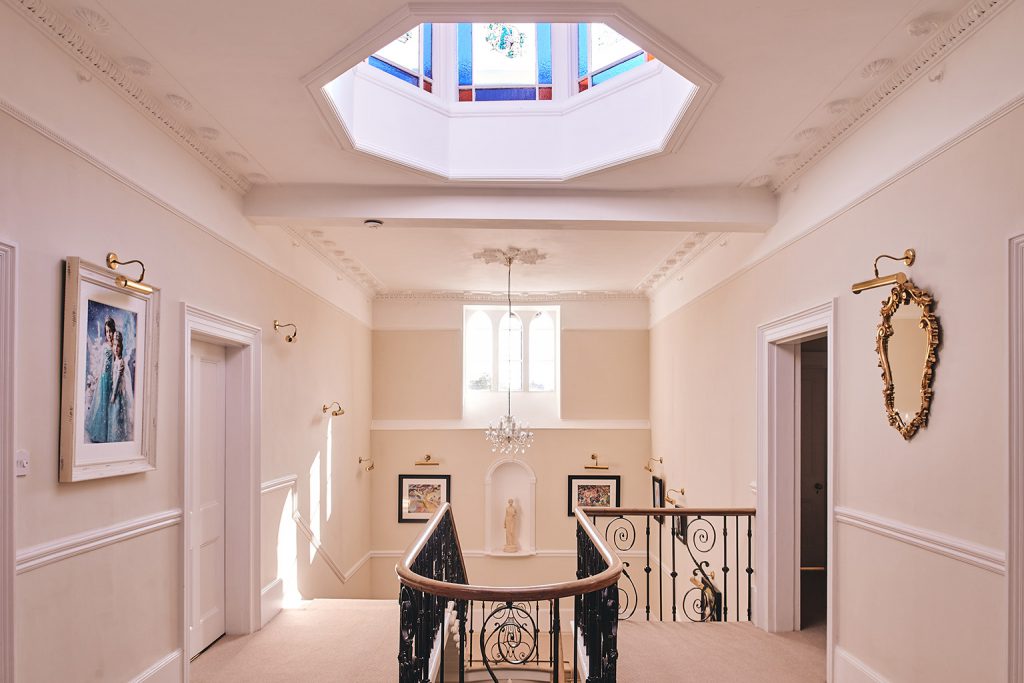 Georgian Features at The Manor Holcombe

As a Grade II listed Georgian Manor House, The Manor Holcombe is a rather special historic holiday rental. Georgian architectural features such as a distinctive roof light, stained glass windows and ceiling roses make it an elegant backdrop for a holiday or celebration.

For fans of Jane Austen’s novels or costume dramas like Bridgerton and Downton Abbey, it is the perfect place to immerse yourself in Regency romance.

The Manor Holcombe has hosted many visitors and residents over the years. The most thrilling has to be the family of Robert Falcon Scott, the famous Antarctic explorer. If you rent and stay in a manor house for a wedding or holiday, you too become part of its rich history.

The Manor Holcombe was built in the late 18th century. It is a time in history known at the ‘Georgian period’, spanning from 1714 to 1830 when there were four successive King Georges on the throne from George I to George IV.  Many architectural features of Georgian style are visible inside and outside the house.

The Manor Holcombe was designed to conform to fashionable design principles of the time with its symmetrical structure and carefully spaced windows. The roof has a low wall or ‘parapet’ running along the top at the base of the roof to make it look rectangular, with a line of classic ‘dentilwork’ below.

Behind the parapet, the original Georgian chimneys are visible on the roof. Inside you will find ornate fireplaces in some of the rooms, including the main sitting room and dining room.

A rooflight crowns the top floor beautifully and fills it with natural light as sunshine streams through its colourful stained-glass picture panels. This Georgian feature is such a clever way to ensure that the staircase and landing are never gloomy but always light-filled.

Ceiling roses adorn many of the rooms, a distinctive hallmark of Georgian houses. They were created as a decorative but practical feature to protect the ceiling from heat and marks caused by candle or gas lights. It meant that only the plaster rose had to be replaced when redecorating, rather than the entire ceiling.

Cornicing is a standard Georgian design feature and you will see it everywhere at The Manor Holcombe. It is the decorative moulding which runs between the ceiling and walls, the most ornate being in the hallway and ground floor rooms.

So typical of Georgian houses, The Manor Holcombe has beautiful sash windows which function by sliding up and down on weights and pulleys.

When you rent a country house near Bath, a visit to the city itself is a must for discovering more about Georgian England. It is just half an hour’s drive away from The Manor Holcombe.

The city of Bath is a UNESCO World Heritage site, thanks to its well-preserved historic gems from Roman and Georgian times so it makes a fascinating day trip.

Firstly, promenade down The Royal Crescent, a magnificent Palladian style row of perfectly preserved terraced houses, built by John Wood the Younger between 1767 and 1774. Part of it is now an elegant hotel and Spa.

Secondly, cross the Avon by way of romantic Pulteney Bridge. It is a must see for fans of Georgian architecture. The bridge was built by the architect Robert Adam in 1774, integrating shops into his design, inspired by famous Italian bridges notably the Ponte Vecchio in Florence and Rialto in Venice.

Lastly, head to the Jane Austen Centre where you will find out more about what it was like to be part of English Georgian society at the turn of the 19th Century in Bath.

See our short film which showcases the restored Georgian features at The Manor Holcombe, alongside our more contemporary additions such as the pool, hot tub and gym.